A Fresh Corn Chowder Recipe that turns fresh or frozen cobs of corn into a delectable chowder at any time of the year. 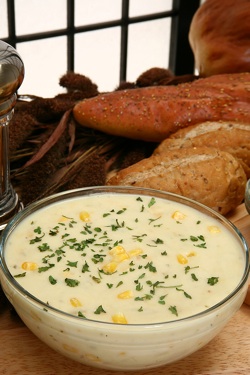 For family meals or entertaining, this corn recipe delivers.

Sweet, Crisp, tender corn kernels nestled in a robust broth. Try this chowder recipe for a meal that brings rich flavor on a peasant's budget. It's filling too and the kids will love it.

It's superb just the way it is but you can change it up by roasting the cobs of corn on the BBQ for 5 minutes before stripping the kernels off. Additionally, top with a sprinkle of cheese or a snip of cilantro.

During corn season, this winner can be made for next to nothing and is elegant enough to grace any table.

Chunks of cooked ham, chicken or seafood can be added with the half & half or to leftovers the following day.