Fantastic Clam Chowder Recipes that are simpler to make than you think. Here's a list of nautical clam chowders that use fresh or canned clams, and instructions for cooking clams in preparation for the chowder pot.

An Old Time Chowder Base Recipe for traditional chowder lovers.

This recipe is a hearty and flavorful beginning to any type of chowder recipe. 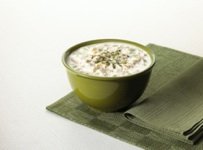 Making a home made clam chowder is simpler than you think, and the reward is a thick, rich chowder that's teeming with clams.

If you're lucky enough to have a supply of fresh clams here's how to prepare them for the chowder pot. 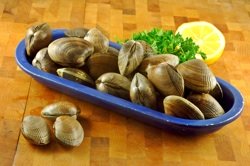 Healthy clams should react by quickly closing their shells tight when you tap them sharply with another clam shell. No reaction or a sluggish response means the clams are dead or close to it, unresponsive clams should be discarded. Also dscard any clams that seem especially heavy compared to the others, they may be filled with sand or mud. Additionally, avoid clams that have a sharp or acrid odor, shellfish should have a pleasant seashore smell.

Pick over and scrub the sand off clams. Dispose of any cracked or damaged clams and any that aren't tightly closed

Fresh clams should be stored in a bucket of seawater, or salted tap water (10 cups water to 1 cup salt) for several hours to overnight. Seed the water with a half cup of cornmeal and the clams will exchange any sand inside them for the much more palatable cornmeal.

After soaking, steam clams in a stock pot removing each clam as soon as it is completely open. Discard any unopened clams. Reserve liquid known as clam liquor.

Remove clam meat from the shell and any tough membrane from large clams.

Chop larger clams into half inch (1 cm) pieces and leave tiny ones whole.

Clams become tough if they're allowed to boil so are usually added to the recipe near the end, addtionally, the milk or cream (New England type) can curdle or scald if boiled. Add the milk and clams at the same time and then reheat and simmer for 5 minutes without boiling.

Use the prepared clams in any of the recipes above.